The Challenges Of Grey Divorces 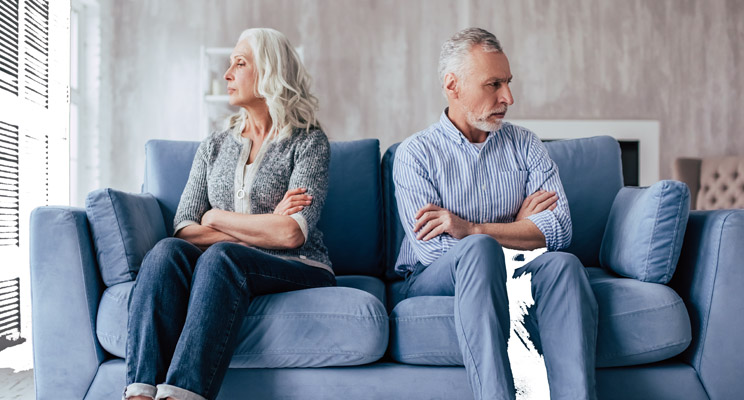 While studies show that divorce rates in the U.S. as a whole have begun to drop, the rate of “grey divorces” – couples who are age 50 years or older and in long-term marriages – is the demographic in which divorce rates are still rising. A significant reason for the rise is a generational divide. Until the Baby Boomer generation, many couples endured decades of unhappiness rather than undergo the stigma of divorce but when Baby Boomers were coming of age, the social stigma of divorce lessened and the Baby Boomers started a divorce surge in the 1970’s, which has not abated as they turned 50 and older. It is also true that many couples wait to divorce until their children have left home and are living independently. Moreover, people live longer than previous generations – a 65 year old man today can expect to live, on average, until age 84.3 and a 65 year old woman. On average, until age 86.6 and many older adults tend to be less tolerant of staying so long in an unfulfilling relationship. Another important factor is that more women have developed professional lives outside the home and are better able to accommodate being without a partner.

Although the separation process, particularly if an older couple mediates their separation, may, at first, seem less daunting than it would if minor children were involved, the reality – both emotionally and financially — can still prove extremely challenging. According to one study by a Bowling Green State University sociology professor and co-director of the National Center for Family & Marriage Research, people who have gone through a grey divorce report higher levels of depression than those whose spouses have died. An LA Times article also recently pointed out that recently separated couples experience higher resting blood pressure than previously and, in comparison to gray married or cohabiting couples, who have, on the average, poverty rates of 4% or less, couples who divorce later in life suffer greater levels of financial deprivation — 11% of men and 27% of women who divorce over the age of 50 live in poverty.

So what can an older couple in a long-term marriage and facing a divorce do to alleviate the stress and face the challenges of no longer living as a couple?

A person who initiates a grey divorce may have been planning to leave for some time, may have already worked through the emotional issues needed to make the break and may have an easier time coping. However, in particular, if you are the one who did not initiate the divorce, you need to be mindful of the impact of the stress of the divorce. If you have a tendency to isolate, are becoming depressed, or find your activity level slipping, you may need to find outside support – a support group, a singles group or a therapist – to talk through the challenges. While finding a new spouse has been found to have the most significant positive impact on someone’s getting over the pain of a divorce, rushing the process before you have coped with your loss, can cause you additional anguish. As with the death of a spouse, there are often stages to go through – anger, bargaining, depression — before you can move on.

It may help to put your married life behind you. Boxing up reminders of your past life that give you pain may be beneficial. So may reconnecting with old friends and family members and pursuing interests that you may not have had time for in your previous family life. At 50 year of age or older, you also likely have given a great deal of your life to other people and to outside obligations. Now may be the time to become a bit more “self” centered and protective of your own emotional and mental health. Give yourself permission to be good to yourself. Be aware that obsessing about your ex-spouse, self-isolating or diving into a rebound relationship may not be good for you but that maintaining healthy routines, starting new ones that you enjoy and talking with a professional or people going through, or who have gone through, the divorce process are likely more healthy options.

It is also important that you realize – and that the professionals you use aid you to understand – the realities of your particular economic situation. You need to understand how the divorce will impact your finances, taxes and budgeting and what steps you will need to take to prepare for this new life. The income impact of divorce is particularly hard on older women, who, research has shown, have double the financial decline than that of younger divorced women. However, many older men also struggle with grey divorce’s financial impact. While previous studies have found that divorce had a negligible impact on younger men, recent studies show that older men see their standard of living dropping by about 21%.

You should realize that the prospect of living with less money can turn an amicable divorce hostile. A larger wage earner is often resentful of being pressured to split hard-earned retirement assets with a spouse who has not worked as long or has earned significantly less money. And if the other spouse – usually the woman – has taken time to raise children or has otherwise supported their spouse’s professional development, they may be angered by the spouse’s failure to recognize those contributions. Moreover, a determination of each party’s pre-marital and marital property may also be less clear-cut in a longer marriage and lead to significant conflict over what belongs to each of the parties.

Even if the divorce remains amicable, you should be aware of potential economic pitfalls. Many older persons have a strong desire to hold on to what was their family home and the happy memories it represents and may agree to forgo a split of the other spouse’s retirement assets in order to keep living in the home, not taking sufficiently into account the cost of its maintenance, taxes, ones medical expenses or lack of liquid assets. Health insurance and social security benefits are also issues that should be understood and dealt with. A financially savvy mediator, litigator or financial advisor is a critical ally.

This is not to say that a grey divorce is a bad decision. Many people find that ending a tumultuous relationship is a positive ending in itself, or that they are much happier and healthier in their new life. Or that although healing takes time, they can use the wisdom gained from a longer life to overcome the challenges they face. But it is necessary to be well prepared for the challenges as you begin on you new later life.